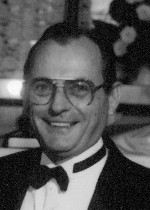 He began his career as a high school English teacher and retired as a district director for the American Red Cross.  During that time, he was fortunate to work with many dedicated volunteers and first responders from towns and villages across central and southern Illinois.

Throughout his life he enjoyed the challenge of putting words together in a rhythmic and rhyming fashion to tell a story.  In retirement he wrote and self-published his own collection of poetry entitled, The Meter’s Running. Several verses follow in this obituary.

Volunteers
When the system parcels out goods and services here about, volunteers in active parts serve as kings and queens of hearts.

He attended St. Peter’s Cathedral Grade School in the good care of the School Sisters of Notre Dame, and Cathedral High School where the Brothers of Mary demanded a high level of performance from “the 49ers” class of 1949.

A Forty-Niner
In June of forty-nine we came to church in cap and gown, and proudly stood to form a line, for rights insuring some renown.

He continued his education at Rockhurst University and Saint Louis University where the Jesuits inspired an interest in language, learning, and the value of embracing one’s faith.

He was a friend and admirer of the “Greatest Generation” always finding hope and courage in their selfless nature to advance the nation.

Nostalgia
Remember times of two-by-fours and pounds of coffee sold in stores.  The quarts of milk were topped with cream, and Stan the Man fulfilled a dream.

He proudly served as a member of the United States Marine Corp, 1951 – 1954, scouting enemy positions in combat during the Korean Conflict.  He concluded his services as S/Sgt.

He was a loving husband, father, grandfather, a loyal friend to many, a voice of reason, and always willing to lend a hand.

Drums
The drums are mute beside the grave allowing peaceful quite time to spend the tears and then to save a folded flag to end the rhyme.

He was preceded in death by his father, Adolph B. Nesbit; his mother, Thelma Nesbit-Hier, his loving grandmother, Regina Marxer-Nesbit; and a brother, Reverend Walter G. Nesbit, SJ.

Memorials may be made to the St. Peter’s Cathedral Food Pantry, 200 West Harrison, Belleville, IL, 62220. Condolences may be expressed to the family online at www.rennerfh.com.

Entombment will be at Green Mount Catholic Mausoleum, Belleville, IL.