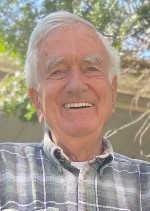 Chuck was a loving husband, father, grandpa, and great grandpa. He worked his entire career at Union Electric / Ameren Corporation. He was a lifelong member of St. Augustine of Canterbury Catholic Church, Belleville, IL, and a current member of St. Michael Catholic Church, Paderborn, IL. He was very active in St. Louis Children’s Hospital, The Muny, among others.

He was preceded in death by his parents, Charles and Clara, nee Jorn, Mueller; a sister, Dorothy “Dot” Mueller; and a brother, Vin (Alva) Mueller, and their daughter, Lynn.

Memorials may be made to St. Louis Children’s Hospital, The Muny, or to St. Augustine of Canterbury Catholic Church. Condolences may be expressed to the family online at www.rennerfh.com.