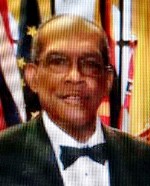 Mr. Watkins was a proud veteran of the United States Air Force, having served in both Vietnam and the Persian Gulf.   He was a member of the Scott VFW Post #4183, Belleville, IL, and served as past Commander and past District Commander of the 14th District of the Illinois Veterans of Foreign Wars.  Charles was a member of Mt. Olive Baptist Church, Lebanon, IL and Antioch Baptist Church, Muncie, IN.

He was preceded in death by his parents, Charles and Maryellen, nee Smith, Watkins.

Memorials may be made to his fiancé, Judith Burns.  Condolences may be expressed to the family online at www.rennerfh.com.

Visitation will continue from 8 to 8:45 a.m. Friday, November 11, 2016, at the funeral home, with a funeral procession to leave at 8:45 a.m. for a 9:30 a.m. committal service with military honors at Jefferson Barracks National Cemetery, St. Louis, MO

Heartfelt condolences to Judy and the entire Watkins family. Charlie was a great man and will be sorely missed — he has touched many lives in a very positive way.

Judy, you know how deeply sorry we are to learn of Charlie’s passing. Although we didn’t know him well, we felt like we did–he was that kind of guy. All our love and prayers go out to you.
God’s blessings!
Terry and Jenna

Charlie will be sadly missed by all his VFW comrades, God Bless

I served with Charles t Vanderberg Air Force Base in California. He will be missed.

Charlie has been so much to so many. He served as a mentor, friend, big brother, and comrade. He always shared that voice of reason that will be with us forever. My condolences to Judy, Jimmy and the entire Watkins. A great man to have known.