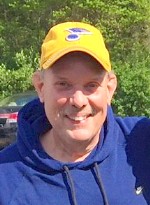 Chris was the owner and operator of his own Pepperidge Farm Distributorship for many years before his retirement earlier this year.  He was a member of St. Augustine of Canterbury Catholic Church, Belleville, IL, and a member of the Smithton Athletic Association.  He was an avid Cardinals baseball fan and volleyball player, playing in clubs for many years.  Above all else, Chris was a family man who had a special place in his heart for time spent with his children, grandchildren, siblings, nieces, and nephews.

He was preceded in death by his parents, James Joseph Jr.  and Margaret A., nee Schaefer, Boucher; a sister, Deborah Mispagel; a nephew, Joseph Mispagel; and his former wife and mother of his children, Michele Boucher.

In lieu of flowers, memorials may be made to Evelyn’s House Hospice House, Creve Coeur, MO. Condolences may be expressed to the family online at www.rennerfh.com.

A drive-by memorial and celebration of life will be held from 1 to 3 p.m. Sunday, September 20, 2020 at Pavilion #1 of the Smithton Village Park.