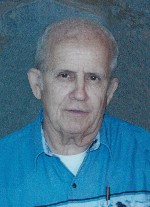 Mr. Tune worked for the Boeing Corporation in California before his retirement.  He and Mary were avid bingo players at the St. Mary/St. Augustine Friday night bingo. Claude was a U.S. Navy Korean War veteran and a member of the American Legion Post 58, Belleville, IL.

He was preceded in death by his parents, Charles S. and Mabel A., nee Carmen, Tune; and a step-son, Stephen Eitzenhefer.

Memorials may be made to the Bingo at Notre Dame Academy  or to the American Heart Association.  Condolences may be expressed to the family online at www.rennerfh.com.

Funeral:  Funeral services will be held at 7 p.m. Thursday, July 9, 2015 at the funeral home with Msgr. William McGhee officiating.  Burial will be held at a later date.

Thoughts& Prayers to the family of my Aviston High School classmate, Claude. Although I did not see him often, when we did, we always had a great conversation. Sympathy to you at this time of your loss. Also, sympathy to his sister “Pep”.

Our thoughts and prayers are with you and your family during this difficult time.