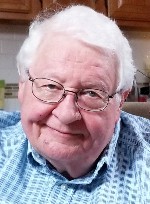 Mr. Mudd was an electronic engineer for the US Army Aviation Systems Command, St. Louis, MO, before retirement.  He was a former Special Education Board Member and past President of Belleville School District #118, and former member and past President of the Belleville Philharmonic Society. Mr. Mudd was a life-long member of Amateur Radio Operators, member of the St. Louis Auto Racing Club, and longtime member of the Missouri Botanical Garden.

He was preceded in death by his wife of 56 years, Audrey M., nee Davis, Mudd, whom he married on September 3, 1960, and who died on June 4, 2017; his parents, Clemence P. Sr., and Estella K., nee Miller, Mudd; a sister-in-law, Bonnie Fay Sigman; and three brothers-in-law, Donald Davis, Eugene Athmer and Bob Sigman.

Memorials may be made to the Belleville Area Humane Society, or the Missouri Botanical Garden, or to the charity of the donor’s choice. Condolences may be expressed to the family online at www.rennerfh.com.