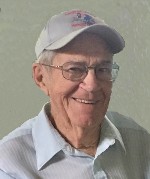 Cleo retired from St. Elizabeth’s Hospital after working in the maintenance department for 23 years. He previously worked at Swift and Co. in East St. Louis for 17 years, and St. Paul’s Nursing home for 15 years.  Mr. Baldwin was a United States Air Force veteran who served in Korea and WWII.  He was a member of Troy United Methodist Church and a past member of St. Paul’s United Church of Christ. Cleo was an avid sports fan.  He enjoyed following baseball and football throughout his life.  His favorite teams were the Patriots and the St. Louis Cardinals.

He was preceded in death by his wife, Rosella M., nee Martin, Baldwin, whom he married on January 1, 1952, and who died on November 6, 1980; his parents, Cleo and Eleanor, nee Schenborn, Baldwin; and sister, Doris Helfrich.

Memorials may be made to the American Diabetes Associations. Condolences may be expressed to the family online at www.rennerfh.com.