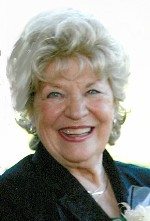 The family would like to express our love and appreciation to Dr. Salma Mannan-Hilaly for her friendship and loving care.

In lieu of flowers, memorials may be made in the form of Masses, to St. Augustine of Canterbury Catholic Church, or to Family Hospice.  Condolences may be expressed to the family online at www.rennerfh.com.

Funeral:  A Mass of Christian Burial will be at 12 noon Friday, April 27, 2018, at St. Augustine of Canterbury Catholic Church, Belleville, IL, with the Msgr. William McGhee officiating.