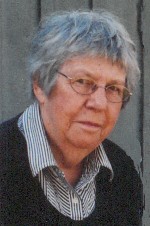 Mrs. Cherry was a registered nurse, who had worked for a short time at St. Elizabeth’s Hospital, Belleville, IL.  She was a past president of the Belleville Philharmonic Society and was associated with the Poor Clare Monastery in Belleville, IL. A graduate of St. Mary of the Woods in Indiana, she was a member of Kappa Gamma Pi – National Catholic College Graduate Honor Society.

Dorothy was preceded in death by her husband of 52 years, John T. Cherry, whom she married on November 9, 1952, in Concord, MA, and who died on February 20, 2006; a daughter, Dr. Christine Cernik; and her parents, Henry F. and Edith M., nee Spiers, Chamberlin.

Memorials may be made to the Poor Clare Monastery.  Condolences may be expressed to the family online at www.rennerfh.com.

Funeral:  A Memorial Mass will be at 11 a.m. Monday, September 21, 2015, at the Poor Clare Monastery Chapel, Belleville, IL, with Msgr. John Myler officiating.

Connie and Joe and grandkids: I am so sorry and shocked to hear of Dot’s passing. I was looking for an obituary and happen to find Dot’s. I can’t imagine how I missed seeing it in the paper unless I was out of town. I worked with your father in the CE Squadron at Scott and saw a lot of your mother. What terrific people they both were. He was so full of wisdom and knowledge, I always parted from our little early morning conversations with sheer amazement. When I promoted out of CE, they both came to my going away coffee and I thought that was so nice since your Dad had already retired. Again, I am so sorry to hear of your Mom’s passing and you are all in my thoughts and prayers.