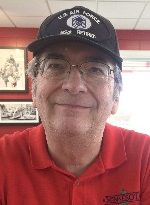 Dale joined the U.S. Air Force in 1974 and served as an airplane/field scheduler.  Dale married Barb on June 11, 1983, while he was stationed at Scott Air Force Base.  Together they were stationed in Japan where they had two daughters, Brandi and Katie.  Dale retired from the U.S. Air Force in 1994.  He then earned a Bachelor of Science degree in Computer Science from SIU at Edwardsville and finished out his career as a data base administrator for AT&T.

Dale loved to fish for walleye and sunfish with his dad and brothers. He often shared stories about his fishing trips to Minnesota and Canada with anyone who would listen. He taught himself to play the guitar and dobro.   Dale performed with Dudley’s Rush, a blue grass band that raised money for the youth at Union United Methodist Church.  Dale liked to BBQ in the backyard for Sunday family get-togethers.  The family shares a love for all things Disney, and Dale loved wearing Mickey Mouse t-shirts every time his grandsons came to visit.

Dale was preceded in death by his mother, Margaret, nee Houck, Andersen.

In lieu of flowers, donations may be made in Dale’s honor to the Saint Louis Zoo. https://www.stlzoo.org/give/tributes. Condolences may be expressed to the family online at www.rennerfh.com.

Visitation:  A walk through memorial will be held from 2 to 4 p.m. Monday, April 5, 2021, at George Renner & Sons Funeral Home, Belleville, IL. Covid-19 safety protocols will be followed.