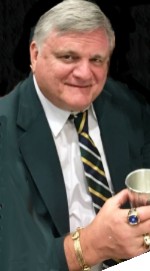 At an early age, David moved with his family to Illinois where his athletic career took off. He was a three-time All-American in football at Maine South High School in Park Ridge. He also excelled at basketball, scoring over 1,500 points for the school, and held the state high school discus record for 13 years.

David earned a Bachelor of Science degree with a double major in Physical Education/Health and Safety, and a minor in Speech, from Purdue University in 1973. David’s athletic talent continued on the Boilermakers’ football team where he was voted to the College All-America Team in 1972. In 2004, David was inducted into the Purdue Intercollegiate Athletics Hall of Fame and the College Football Hall of Fame in 2014.

Selected in the 1st round of the NFL draft by the St. Louis Cardinals in 1973, he was subsequently acquired by the Washington Redskins in 1975.He was a resilient and feared defensive lineman for the Redskins. While with the team, David played in three Super Bowls, serving as captain for two of them. He retired from professional football in 1989 as one of the most revered players in the history of the franchise. In 2002, he was selected as one of the 70 Greatest Redskins of all time and voted to the 40 Greatest Redskins of all time. David finished with a total of 203 games as a Redskin and the second-highest sack total in team history (62.5). He was later honored at Fed Ex Field with his name listed in the Washington Redskins Ring of Stars.

David was an avid shooter/hunter, who was an outspoken advocate for Second Amendment rights. He was an NRA Benefactor member that made numerous commercials and appearances for the NRA. During his lifetime, he served on several nonprofit boards and participated in a variety of shooting competitions to raise money for numerous charities. David won top shooting awards in the Charlton Heston Celebrity Shoot, Schwarzkopf Cup, and Louise Mandrell Celebrity Shoot. He was a life member of National Sporting Clays Association, the only recipient of four George Allen Leadership and Achievement Awards, and in 2012 was inducted into the Grand National Quail Hall of Fame.

In his memory, donations can be made to https://events.lustgarten.org/DaveButz65 which will support pancreatic cancer research. Condolences may be expressed to the family online at www.rennerfh.com.

In lieu of a traditional memorial service, the family will host a celebration of life at a later date with close family and friends.