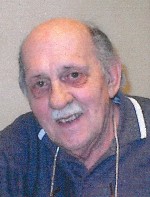 In his youth, David loved music and started playing both clarinet and saxophone professionally at the age of 16 with many of the local dance bands.  He auditioned and received a direct assignment to serve in the United States Air Force band during the Korean War.  As a hobby he collected Gilbert American Flyer toy trains, Erector sets, and other toys.  He was one of the founders of the American Flyer “S” Gaugers of the St. Louis area and helped design and build the Famous & Barr Christmas Train window display in downtown St. Louis.

He was preceded in death by his wife of 59 years, Genevieve, nee Klein, Daniels; his parents, John and Leona, nee Honer, Daniels; and his brother, Floyd Daniels.

Memorials may be made to St. Clare Catholic Grade School Endowment Fund, to St. Nicholas Catholic Church, or to the O’Fallon Knights of Columbus.  Condolences may be expressed to the family online at www.rennerfh.com.

Dave will be surely missed in our club. I had many a wonderful conversations with him about S gauge trains and his T-Bird. I’m sorry to hear of his passing. Marc A. Brabb

Duane and Kenny and family, We just saw this and wanted to let you know how very sorry we are for the loss of your dad. Please hold all of the memories close to your hearts forever! Prayers for you all!!!❤

So sorry for your loss.

Dorothy Daniels Feitsam left us August 2015, she found so much pleasure talking with David. She told me about her appreciation for David.Our sincerest sympathy to the family, the mick karrs

You have our deepest sympathy. Our thoughts and prayers are with all of you.

I rented a trailer from him when I was young and also worked for him doing newspapers. Deepest condolences for the Daniels Family.

Duane,
My deepest condolences on the passing of your father. My thoughts and prayers are with you and your family.