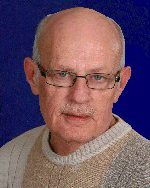 Mr. Newton was a United States Air Force veteran who worked in personnel administration.   After retiring from the Air Force, he worked for the Illinois Secretary of State Department of Motor Vehicles for fifteen years.

He was preceded in death by his parents, Arthur and Dorothy, nee Tallman, Newton.

Surviving are his wife of 51 years, Barbara, nee Botts, Newton, whom he married on September 3, 1966;
two sons, Bryan Newton of Salisbury, Maryland, and Jon (Jay) Newton of Belleville, IL;
a sister, Betty Newton of Reading, PA;
and two brothers, Wayne Newton of Montoursville, PA, and Nevin Newton of Birmingham, AL.

Burial will be at Arlington National Cemetery, Washington, D.C., at a later date.