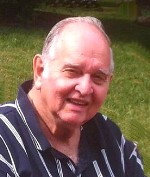 Print Obituary
Delmar George “Bud” Riess, of Swansea, Illinois, was born on June 20th, 1931, and at the age of 85, peacefully passed away at St. Paul’s Senior Community in Belleville, Illinois on June 7th, 2017.

Bud was a US Army Korean War Veteran, serving the country he loved, as a Corporal in the Infantry Division. He was a life-time member of the Korean War Veterans and the Veterans of Foreign Wars.  Upon completion of his Korean assignment, he returned to the Army National Guard where he continued his service for 26 years and completed his career as a First Sergeant. He worked several different jobs during his life to support his family, including Emerson Electric, School Supply Service Company and Mueller Furniture. He was also a member of the Carpenter and Teamsters Union.

Bud was a lifelong member of St. Peter’s Cathedral Catholic Parish, where he was a member of the Men’s Choir and served for 10 years on the Bereavement Luncheon Committee with his wife of 63 years, Jane. He was an honorary member of the Swansea Rotary Club, Paul Harris Fellow and a faithful participant of the Patriotic Flag Program. He loved giving back to the community in which he spent his entire life. In addition, Bud’s love for St. Louis Cardinals baseball was second to none – from listening on the radio as a boy to watching all the televised games as he grew older. Let’s Go Cardinals!

Bud loved the outdoors and he enjoyed fishing and gardening. He spent countless hours with his father doing both and was so generous sharing the fruits of his garden with family and friends.  He was loved by all who ever met him and he never knew a stranger. From the age of 10, Bud spent his life on the property his father purchased in 1941 and where Bud and Jane built their first and only home in 1957.

The family would like to express their sincere gratitude and love to the Staff at Memorial Hospital, Memorial Care Center, St. Paul’s Senior Community and Hospice of Southern Illinois for their loving care and concern in Bud’s final journey.

In lieu of flowers, memorials may be made in honor of Delmar George Riess to the St. Louis Chapter of Disabled American Veterans, 9700 Page Ave., Suite 101 Rm 1-096, St. Louis, MO 63132 or to St. Peter’s Cathedral Catholic Church, 200 West Harrison Street, Belleville, Illinois 62220.  Condolences may be expressed to the Riess family online at www.rennerfh.com

Visitation: Family and friends are welcome to visit with the immediate family from 4 to 8 PM on Friday June 23rd, 2017 at George Renner & Sons Funeral Home, 100 North Illinois Street, Belleville, Illinois. On Saturday, visitation will be from 9 to 10 AM at St. Peter’s Cathedral Catholic Church.

Funeral Services: The Mass of Christian Burial will commence at 10 AM at St. Peter’s Cathedral Catholic Church, officiated by Monsignor John Myler.

A private burial will be held at a later date at Green Mount Catholic Cemetery in Belleville, Illinois.

My love and prayers to all of our family up there…Uncle Bud treated me like family from day one. A real, genuine, and loving soul. A definite role model for anyone at any age. Rest eternally Uncle Bud.

My prayers and hugs go to each and everyone of you during this difficult time. May his soul rest in peace. My heart goes out to you all during this trying time and may my prayers serve as comfort to you and your loved ones.