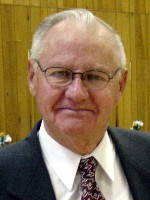 Print Obituary
Delmar William Dahm, 89, of Belleville, died Saturday, April 30, 2016, at Sycamore Village, Swansea, IL.  He was born to William and Erma, nee Voellinger, Dahm in October 1926, on Concordia Church Road, just west of Belleville.  He married the late Marilyn, nee Rieso, on August 28, 1954.  They had been married 60 years.

Delmar grew up hard-scrabble with his family on the Dahm homestead just west of Belleville.  They worked the land with mules and manual plow.  The joke was “300 acres and 600 hills.”  Delmar, with his mother, were the last Dahms to leave the farm in 1952, after over 100 years in the family.  He served our nation’s military in Korea and Japan during the Korean Conflict.  In 1954, he married and started his family in Belleville.  He worked as a utility man and forklift operator at the same factory in Madison, IL for over 25 years.  When the factory closed, Delmar became an entrepreneur; serving as local handy man, landscaper, plumber, carpenter, (you name it) for homeowners all over Belleville.  He fed, clothed, and raised his family with his beloved wife.  Despite his difficult childhood, he was reliable, dependable, hardworking, and responsible. He and his wife created an environment in which his children could excel.  They will miss him greatly.

Delmar volunteered for the Belleville Senior Citizen’s Club, Meals on Wheels, and the Democratic Party.  He was a 60-year member of St. Mary’s Catholic Church, Belleville, IL, and was also a member of the Belleville-Swansea Moose Lodge #1221.

Delmar and Marilyn loved gardening, dancing, gambling at the casino, watching Cardinal baseball, and playing cards with friends.  They worked hard, but they played with equal vigor.  They were the salt of the earth.

The family wishes to express their sincere gratitude to the special care givers at Sycamore Village.

Memorials are appreciated to the Alzheimer’s Association or St. Mary’s Catholic Church.  Condolences may be expressed to the family online at www.rennerfh.com.

Funeral: A Mass of Christian Burial will be held at 10 a.m. Wednesday, May 4, 2016 at the church with Fr. Christopher Anyanwu officiating.  Burial with military honors will be at Valhalla Gardens of Memory, Belleville, IL.

Larry, Mike, Debbie, Jim & Allen: We mourn Uncle Delmar’s passing for two reasons, the loss of a great man, your father, and second, the end of that whole generation of Dahms. We, the entire extended family, need to reflect on and cherish all the memories those 13 uncles and aunts gave us over the last 70+ years. RIP Uncle Delmar, my Godfather.

We were so sad to hear this news. Our deepest sympathies to all the Dahm Family. “The Lord is close to the brokenhearted and saves those who are crushed in spirit.” Psalm 34:18

There goes the neighbor hood!
Never again will our paper be on our porch each morning. No more that smiling face at our door with his home grown vegetables.no more baseball talk. No more “I can help you with that”. With deepest regret we will miss his very presence and example of simple grace. We will remember “Del” and when we do we will smile.
Tom And Inez Bridges

Larry, Mike, Debbie, Jim & Allen… I am deeply saddened with the passing of both your Mom & Dad in such a short time. For almost 60 years, the Dvorachek & Dahm families were closer than most relatives, and there are many happy memories ranging from carpooling to grade school and high school to joint vacations and summer jaunts to St. Louis. May both Marilyn & Delmar rest in God’s peace.