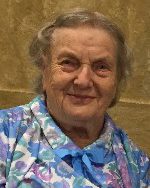 Mrs. Wilhelm was a homemaker who enjoyed spending time with her grandchildren and great-grandchildren. She loved to bake Christmas and Easter cookies.  She was a member of St. Mary’s Catholic Church and Our Lady of Good Counsel, Quilters and Mother’s Club all at the church. Delores also enjoyed working in her garden, church picnics, and playing bingo.

The family wishes to extend their thanks to the 3rd and 6th floor staff at St. Elizabeth Hospital for the loving care they provided Mom during her stay. They would also like to thank the staff of Family Hospice for providing Mom her wish of being taken back to her home.

Memorials may be made to St. Mary’s Church or to Family Hospice. ­ ­­­­­­Condolences may be expressed to the family online at www.rennerfh.com.