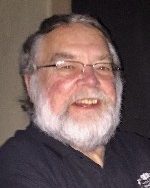 Dennis was the only child of the late Edwin and Pearl, nee Milan, Nelson. He grew up in Galesburg, IL, where his childhood was spent helping his parents operate Nelson’s Confectionery. He attended Galesburg High School, the University of Illinois, where he was a member of Theta Delta Chi fraternity, and Southern Illinois University at Carbondale, IL. He worked for 25 years at Mallinckrodt Medical. After retirement, he worked several years as an AmeriCorps volunteer in Belleville District 118, and as an Oasis volunteer in adult literacy.

Anyone who knew Dennis knows that our celebrations will never be the same without him at the helm. Aside from his being an excellent host, his quick wit, dry humor, intellect, curiosity, and generosity will be forever missed. Whatever interests he pursued, he pursued completely, whether that be winning a trivia competition or teaching his young daughter obscure words from the dictionary. His ever-shifting hobbies included: gardening (he was a Master Rosarian), geocaching, collecting bourbon, sailing, playing competitive darts, and traveling. But his one consistent “hobby” was his daughter and her various pursuits, including his four-year stint as the most enthusiastic band parent Belleville East has ever seen. His gruff exterior hid a truly warm and devoted husband, father, and friend.

Dennis is survived by his wife of 32 years, Linda (nee Kramper), and his daughter, Betsy Nelson of Boston, MA.
In lieu of flowers, memorials may be made to the Belleville Area Rose Society, to St. Louis Oasis, or to the Trevor Project. Condolences may be expressed to the family online at www.rennerfh.com.