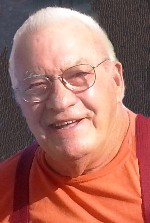 Mr. Stoeber was self-employed as a common carrier in the trucking industry.  He was a past president of the Illinois Mobile Home Association and had been a co-owner of the Elevator Restaurant in Belleville, IL.  Dennis was a U.S. Marine Corps veteran of the Korean Conflict.

He was preceded in death by his parents, Herman J. and Clara, nee Goepfert, Stoeber; and four brothers, Leo, Warren, Stanley, and Roger Stoeber.

My condolences to the family.Dennis you will be missed by all at goedecke.What a guy.

We never got to know Dennis very well, but when we moved in down the street six years ago he graciously welcomed us to the neighborhood. Every time we saw him he would smile and wave, occasionally stopping with some kind words. Such a nice man. Our condolences to his family.

My sympathy to the family of Dennis Stoeber. I first met Dennis June 2010 and we became good friends, both Marines and having an understanding of the service members who sacrifice daily so we can enjoy our freedoms. A true friend who I will remember in years to come. Rest in peace, my friend. Semper Fi

My family and I wish to express our condolences to the family of Mr. Stoeber. We have known him for a long time and he was a good friend, sorry to hear of his passing.

My condolences to the family and close friends. Known Dennis for about 13 years. He always had smile on his face and time to visit. We will miss you.