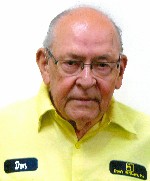 Print Obituary
Donald J. Bujnak, 85, of Belleville, IL, born June 25, 1932, in Belleville, IL, was blessed with a rapid and peaceful passage to his eternal reward with his wife by his side on Friday, October 13, 2017.

Don had been a resident of The Shrine of Our Lady of the Snows for one month.  He was a man of many accomplishments.  He began his career at Stegmeyer Furniture as a teen, worked at Etling Skelgas and then for Eidmann Appliances.  When Mr. Roy Eidmann retired, he bought the service department and on January 1, 1967, established Appliance Service Co. at 200 North Jackson Street in Belleville, IL.  On January 1, 1969, he moved that business to Swansea and changed the name to Don’s Appliance Company.  On October 26, 1971, he bought Wade Square Hardware, and it became Don’s Appliance and Hardware. After the loss of his beloved wife, Doris, he became a single father and the children worked in the hardware store by his side.  He placed a pinball section in the store, called Don’s Arcade, and counseled many teens against drugs.  He set up dance classes to keep teens off the streets. In 1975, he established Don’s Leather Goods within the store and on September 1, 1978, he established Don’s Hardware, Inc.  He taught refrigeration at a branch of SIU and BAC in East St. Louis.  He had never graduated high school and his students kidded him about it. So, he decided to get his GED when he was in his fifties.  In 1996, he built Don’s Parts Center on Lebanon Avenue.  If he could assist anyone in any way, he never failed to do so.

By his own description he was a “semi-celebrity” in Belleville.  His radio and television commercials with their corny jokes endeared him to many people in the metro-east area.  His slogan “Don’t Sleep With a Drip” never failed to bring a smile.  He was a volunteer firefighter with East Side Fire Protection District, a member of the Belleville Loyal Order of Moose, an avid midget race car fan, a member of Team Chocolat for Relay of Life, a dedicated volunteer at Jail and Bail and a member of Blessed Sacrament Parish. He received Belleville Jaycee’s “Outstanding Citizen Award” for 2002.  For over 20 years he brought joy to hundreds of children as Santa Claus and only stopped when his hearing became inadequate.  He married for the third time at the age of 74 and built a new store, Don’s Hardware and Parts Center, on Boul Avenue in Swansea at the age of 75.

He was a loving husband, father, grandfather, and great-grandfather, who touched the lives of others in measures beyond words.  He will be greatly missed by all who knew him.

In lieu of flowers, memorials may be made to the Polycystic Kidney Disease Foundation or to Blessed Sacrament Parish.  Condolences may be expressed to the family online at www.rennerfh.com.