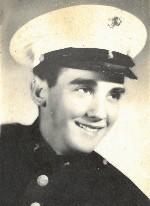 Mr. Fix worked as a meat cutter for many years before retiring from Kroger Stores. He was a member of both St. Mary Catholic Church and St. Augustine of Canterbury Catholic Church, Belleville, IL. Donald was a United States Marine Corps veteran, and a member of the American Legion.

He was preceded in death by his wife of 64 years, Marie “Theresa”, nee Howard, Fix; a grandson, David A. Fix; his parents, Emil and Lillian, nee Mullet, Fix; a brother, Ronald Fix; and a sister, Doris (Donald) Lougeay.

Memorials may be made to St. Augustine of Canterbury Catholic Church, Belleville, IL, or to the American Cancer Society. Condolences may be expressed to the family online at www.rennerfh.com.

Visitation: Friends may visit from 9 to 10 a.m. Thursday, April 22, 2021, at George Renner & Sons Funeral Home, Belleville, IL. Standard CDC guidelines, including masks and social distancing and a limited number of visitors at any one time, will be observed.