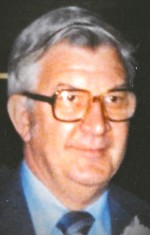 Mr. Forness served in the United States military as a former Navy service member in Korea from 1948-1953. He was a former supervisor test technician for Emerson Electrical-ESCO, where he worked for 33 years and later retired from.

Don was a loyal member of St. Mary Catholic Church and belonged to the St. Mary Athletic Club, the St. Mary Men’s Club and served as a former president and treasurer. Don was involved in SAVE (St. Clair Associated Vocational Enterprises, Inc.) Boosters Club for 30 years. He was a lector for St. Mary since 1964 and money counter since 1970. Don was a member and former president of the American Legion.

He was preceded in death by his wife, Delores, nee Middendorf, Forness, whom he married on November 24, 1955; his parents, Nicholas and Marie, nee Ewald, Forness; a sister at birth, Virginia Forness; and a sister-in-law, Audrey Forness.

In lieu of flowers, memorials may be made to SAVE (St. Clair Associated Vocational Enterprises, Inc.) or St. Mary Catholic Church, Belleville, IL. Condolences may be expressed to the family online at www.rennerfh.com.

Burial will be held at a later date.