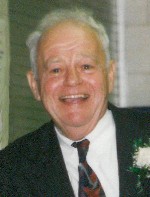 Mr. Lanter worked as a truck driver for Hoeffken Brothers Construction Co., Belleville, IL, before his retirement.  He was a member of St. Peter’s Cathedral Parish, Belleville, IL, a member and past-president of the Holy Name Society at the church, and a member of the Knights of Columbus Council 1028.  Don served on the Swansea Park Board and was a U.S. Navy veteran.

He was preceded in death by a son, Wayne Lanter; his parents, Edward and Cleopha, nee Diekroetger, Lanter; and a sister, Virginia (Norman) Schroeder.

Memorials may be made to St. Peter’s Cathedral.  Condolences may be expressed online at www.rennerfh.com.

Private family burial with military honors will be at a later date at Lake View Memorial Gardens, Fairview Heights, IL.

To Brother Knight Kevin and the rest of the family. Our condolences and prayers are with you on the loss of your family member. All your Brother Knights @ Breese K of C Council #2869.

Don over the years has remained vivid in my memory as a long- time class-mate and friend. He and I went through kindergarten together with Sr. Pacifica and then through our high school years. I cherished our meeting at our last class of ’48 reunion.
Please accept my sincere sympathy and condolences.