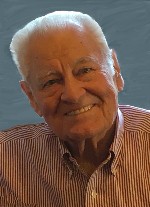 Mr. Parker was a U. S. Army veteran and a member of Swansea American Legion Post 2007.

He was a valued employee with the St. Clair County Highway Department for forty years and excelled at evening sales jobs to support his beloved family. He was a member of St. Mary Catholic Church, Belleville, IL, and took great pride in providing a catholic education for his children.  He was an avid Cardinals baseball fan since 1942 and a season ticket holder for 17 years.

Mr. Parker was a highly successful and respected baseball manager, routinely winning championships coaching his sons’ teams and having a positive influence on their friends and families. He was a favorite of his children’s friends and was warmly greeted throughout his life by members of every generation.

Perhaps most notable was the selflessness of this great man. He lived modestly by choice, always putting his family first. A man of action rather than words, he was loved and respected by all who knew him.

Memorials may be made to St. Mary Catholic Church, Belleville,IL. Condolences may be expressed to the family online at www.rennerfh.com.