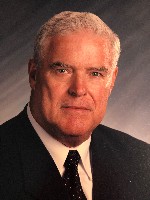 Don was a United States Army veteran serving during the Korean War. He worked for Allstate Insurance Company before his retirement. He was a former member of the Parish Council and Father’s Club at Our Lady of the Assumption Catholic Church, Fairview Heights, IL. Don was a member of the Knights of Columbus and the East St. Louis Rotary Club. He was a current member of St. Henry Catholic Church, Belleville, IL, where he attended daily Mass and served as an usher. Don’s Catholic faith was very important to him.

Memorials may be made in the form of masses for Don or contributions to St. Henry Catholic Church, Belleville, IL. Condolences may be expressed to the family online at www.rennerfh.com.

Burial will be at Mount Carmel Catholic Cemetery, Belleville, IL, at a later date.