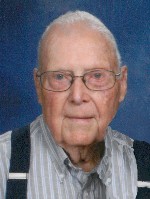 Print Obituary
Donald Elmer Rauch, 89, lifelong resident of Freeburg, Ill., died September 1, 2015, surrounded by his family and those who loved him. He was born March 21, 1926, in the Goose Bottom home of Adolph J. and Clementine, nee Prediger, Rauch.

Don attended Freeburg schools and was a United States Army veteran, serving at Camp Lee, Virginia, where he worked in the woodworking shop during World War II. He also taught woodworking skills to wounded GIs returning to the states. Upon his return to Freeburg from the military, Don became known as one of the area’s best carpenters as a member of Carpenter’s Local 480.

Freeburg residents elected him as a constable in 1953. Don was proud to be a founding member of the Freeburg Sportsman’s Club in that same decade; members know he spent thousands of hours maintaining the property, a legacy that will long survive him.

The family would like to extend special thanks to Kendra, Sharon and Carrie of Family Hospice of Belleville for their care during his final days.

In lieu of flowers, donations made to Family Hospice of Belleville or St. Joseph Parish Center would be appreciated.  Condolences may be expressed to the family online at www.rennerfh.com.

Funeral:  A Mass of Christian Burial will be held at 1 p.m. Friday, September 4, 2015, at St. Joseph Catholic Church, 9 North Alton St., Freeburg, IL. His family is honoring his plans to be cremated.

Donna I am so sorry to see your dad has passed away. My condolences to you and your family.

Betty, Steve, Donna, Cindy, and Family
You have our deepest sympathy for your loss. We will miss Don so much. He was really a special person. You are all in our thoughts and prayers.

Betty, Steve, Donna, Cindy and family,
Our sympathy to you on the loss of Don. He was a good man, as evidenced by the love and devotion you had for him. We’re glad for what little time we had with him in recent years.