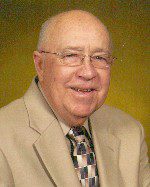 Mr. Veile retired as the owner of Veile Concrete Construction Company, which was started in Belleville by his grandfather over 100 years ago.  He was also the owner of Arapaho Village Mobile Home Park. Donald was a graduate of Belleville Township High School, and was a member of the first graduating class at Belleville Area College.  He then attended Georgia Tech before enlisting in the United States Navy, as a Navy cadet, and served from 1945 to 1948.

Don was a member of the American Legion, a lifetime member of the Kaskaskia Mariner’s Boat Club, and a lifetime member and past-president of the Belleville Jaycees.  As a Jaycee member, Don was the recipient of the Giesenberg Award which recognized the Belleville chapter as the best organized chapter in the state of Illinois.  The award had never been won before and has never been won since.  Don was a member of St. Paul’s United Church of Christ, Freeburg, IL.

He was preceded in death by his parents, Oscar A. and Elenore E., nee Rutter, Veile; a granddaughter, Christie Fox; and three brothers, Norman Veile, Oscar A. Jr. (Ruth) Veile, and Raymond F. (Mildred) Veile.

Memorials may be made to St. Paul’s United Church of Christ, Freeburg, IL, or to the Women’s Guild at the church, or to the Make-A-Wish Foundation.  Condolences may be expressed to the family online at www.rennerfh.com.