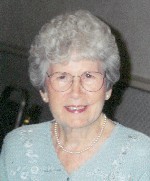 Mrs. Edwards graduated from Murrayville High School, where she was on the cheerleading squad.  Doris and Alfred were married on September 3, 1945, after Alfred returned from World War II in the Pacific. She spent the next 20 years raising Larry and Pat and being Dad’s faithful partner.  Later, Doris took a job as a supervisor of the bookstore at BTHS West and BTHS East, from which she retired after approximately 10 years.  After Dad retired from Civil Service at Scott Air Force Base, Mom and Dad put on many (Legendary) yard sales with goods gleaned and cleaned from multiple sales and auctions they enjoyed attending.  Later, Dad began a slow decline and Doris took good care of him until his death in 2011.  We will miss Mom’s fried chicken, mashed potatoes and white gravy, pecan pie, and lemon cake.

Memorials may be made to Meals on Wheels and St. Jude Children’s Research Hospital.  Condolences may be expressed to the family online at www.rennerfh.com.