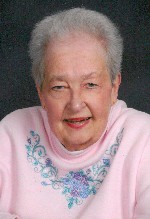 Mrs. Kempfer was a member of Union United Methodist Church, Belleville, IL, and served on the executive board.  She belonged to the Union United Methodist Women, the Ruth Quilting Club, the Dorcas Circle, and worked for the food pantry at the church, where she was also a money counter for many years.  She was a volunteer at Beacon of Belleville and was a Pink Lady at Memorial Hospital, Belleville, IL.  Doris was an avid St. Louis Cardinal baseball fan.

Surviving are a daughter, Judy K. (Tom) Kelley;
a grandson, Sean Kelley;
a daughter-in-law, Linda Kempfer, and her son, Danny Hamilton;
a sister-in-law, Vrene Ketten;
and many nieces, nephews, great-nieces, and great-nephews.

Memorials may be made to Union United Methodist Church, Belleville, IL. Condolences may be expressed to the family online at www.rennerfh.com.

Burial will be held at Elmwood Cemetery, Freeburg, IL, at a later date.