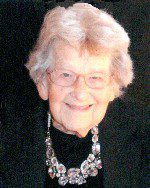 Mrs. McCarkel worked as a census taker for the U.S. Government before her retirement.  She was a member of the Quail Club and the Stag Brewery Retirees Club.  She was a member of St. Paul United Church of Christ, Belleville, IL, and she volunteered a good deal of time to various organizations at the church.

Doris was preceded in death by her husband, Kenneth R. McCarkel, who died on February 1, 1994; her parents, John Beese III and Lorena, nee Young, Beese; a sister, Drucilla Zink; a son-in-law, David Schaefer; and a great-grandson, Dylan Kernan.

Memorials may be made to the March of Dimes or to Hospice of Southern Illinois.  Condolences may be expressed to the family online at www.rennerfh.com.