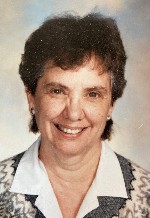 Print Obituary
Dorothea Mae Engelsdorfer, 90, born October 25, 1930, in St. Louis, MO, passed away peacefully at her home on April 7, 2021, surrounded by her family. Dottie was the youngest of three children born to the late Theodore and Ruby, nee Hitz, Glauert. She was baptized in 1931, at Eden Immanuel Evangelical Church in St. Louis, MO, and confirmed on April 2, 1944, at Evangelical Immanuel Church in Ferguson, MO.

She attended the Roosevelt and then Jefferson grade schools in Normandy, later the Cross Keys one-room schoolhouse in Ferguson up through 8th grade, and then Ferguson High School. She started teaching at the Penn School in St. Ann, then pursued her teaching degree at Elmhurst College, Washington University, Harris Teacher’s College and finally Earlham College (B.A. 1954). She earned a graduate degree in Special Education from SIU Edwardsville (M.S. 1981).

Dottie was active in her church and social action groups while growing up, and worked for a period with the Winnebago Indians in Black River Falls, Wisconsin, and the migrants in Cherryland. She began teaching again in 1954 at Desmett in Ferguson until she and Marvin moved to Wabash, Indiana in 1955. They were blessed with five children. She returned to teaching after raising her family, and taught in Belleville, Edwardsville, Worden, Peoria, and Plainfield, retiring in 1994.

Dottie was an incredible mom: loving, fun, and nurturing. She later was an avid reader, gardener, and creator of many needle art treasures. She enjoyed traveling, fishing with her husband, Marvin, visiting the National Parks, Chautauqua, and spending time with her children, grandchildren, and great-grandchildren, who dearly enjoyed her visits and will deeply miss her.

She was preceded in death by her husband, Marvin Engelsdorfer, her parents, her sister, Marylou (Harley) Krieger, and her brother, Earl Glauert.

Memorials may be made to St. Paul United Church of Christ, Belleville, IL, to Heartland Hospice of Fairview Heights, or another charity of your choice. Condolences may be expressed to the family online at www.rennerfh.com.

Memorial Service and a celebration of Dottie’s life will be held at a later date.