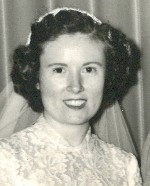 Mrs. Dittoe, following a tenacious search for the truth occasioned by seeing Catholic Churches near where she lived, entered the Church as an adult several years before she met her beloved husband Hugh. Dorothy was the beloved Air Force wife of her husband Hugh, to whom she was joined in the holy sacrament of marriage on May 12, 1956.  Mrs. Dittoe was a teacher and lover of both classical and sacred music, with a devotion to the martyr Saint Cecilia (who died for the faith during a persecution under the Roman Empire) and is the Patron Saint of Music.

For well over a decade Dorothy served as the organist at the Retirement Community of Our Lady of the Snows, and had the occasion to play for a Holy Mass celebrated by the Bishop of Belleville, who, as all bishops, is a successor to the Apostles.  Mrs. Dittoe had a particular devotion to Our Lady of Mount Carmel whose brown scapular she wore following her conversion to the Holy Catholic Church.

Dorothy had a special love for all her cherished piano students who are too numerous to mention, and she held particular admiration for her adult pupil Mr. Byrd, a wounded veteran of the Vietnam war. Her love for animals was known to all.

She was preceded in death by her husband, Lt. Col. Hugh V. Dittoe; and her parents, John and Maude Breeden.

Surviving are her son, Michael J. Dittoe of Arlington, VA; and her relatives Jack Neal and Earl (Caroline) Neal, and others. Mrs. Dittoe’s special friends included the residents of the Apartment Community of Our Lady of the Snows, Sr. Reinna and her religious community, Tina, the Nuns of the Poor Clare Monastery, and many others.

Mrs. Dittoe was very grateful for the love shown to her by the staff at the Shrine of Our Lady of Snows Apartment Community, the caregivers at Home Instead Senior Care, her friend Jonell, and the staff of the Belleville Animal Clinic.

In lieu of flowers, prayers are requested for the souls of any faith, or of no faith at all, who have no one to pray for them, so that they may know God’s love and mercy. Also, in lieu of flowers, a donation may be made to: Catholic Urban Programs, the Oblates of Mary Immaculate, the Poor Clare Monastery, the American Cancer Society, MindsEye (providing service to the blind), the American Foundation for the Blind, any Catholic charity in service of the poor, or any animal shelter. Condolences may be expressed to the family online at www.rennerfh.com.

Funeral:  A Mass of Christian Burial will be held at 11:15 a.m. Saturday, August 26, 2017, at the Shrine of Our Lady of the Snows Apartment Community Chapel, 726 Community Drive, Belleville, IL, with Father Joseph Ferraioli officiating.

Burial will be at Mt. Carmel Catholic Cemetery, Belleville, IL.