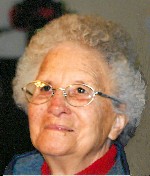 Dottie had worked at Scott Air Force Base, IL, during World War II until the birth of her first son.  She retired from Mascoutah School District 19.  Dorothy enjoyed her grandchildren and great-grandchildren, the outdoors, bowling, and was an avid St. Louis Cardinals baseball fan.

She was preceded in death by her husband of 18 years, Vernon C. Mattern, whom she married on July 10, 1948, and who died on July 21, 1966; her parents, Oliver C. and Edna, nee Lieb, Schroeder; a sister, Betty Schroeder, in infancy; three sisters-in-law, Patricia Schroeder, Burdell Mattern, and Althea Thouvenot; and two brothers-in-law, Harvey Mattern and Roland Thouvenot.

The family requests no flowers.  They suggest donations to the Mascoutah Fire Department, 224 North Railway St., Mascoutah, IL  62258.  Condolences may be expressed to the family online at www.rennerfh.com.

George, Charlie and families:
Please accept my sympathy for the loss of your mother. It was always so nice to visit with her. A great smile and a big heart.