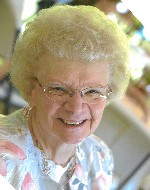 Dorothy graduated from Freeburg High School and enjoyed being on the committee of many of her class reunions.  She married John Ira Parke on June 1, 1953, and he preceded her in death on December 27, 2019.  She was a lifetime member of St. John the Baptist Catholic Church in Smithton.  She was a past member of the Alter Sodality and past President of the PTA.  She was an amazing quilter, helping to make hundreds of quilts for the Church picnics and hosting many “quilt clatches” in her home.  She loved playing games and Bingo was her game of choice.  She could be found every Sunday at the Turner Hall in her special seat with her 24 cards and her good luck charms in their rightful places, lined up above the cards, waiting for the bingo caller (her husband John) to call her numbers. For more than 30 years and at every Homecoming picnic or church picnic, all the grandchildren knew where to find grandma, always in her favorite spot, from the first game to the last.  She loved and believed in the Blessed Virgin Mary and the rosary and had a collection of over 300 rosaries that she would gladly get out and show to anyone who wanted to see them.

To her family, her greatest accomplishment was being a wonderful wife, mother, and grandmother.  She was an amazing homemaker.  For every special occasion, you could count on her to make her famous “chocolate stuff” dessert.  She doted on her children and grandchildren, always making sure they had full bellies and money in their pockets, while she stood at the front door waving as they left.

Memorials may be made to St. John the Baptist Catholic Church.  Condolences may be expressed to the family online at www.rennerfh.com.