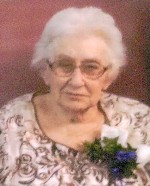 Dorothy was born May 25, 1928, to Walter and Mary Christenson of Rosemont, IL.  She met the love of her life, Albert Slack, at a roller-skating rink. They were married August 17, 1946, during the great flood of East St. Louis. She was a homemaker and a very good one. She enjoyed playing cards, yard sales, trips to White Castle, and making delicious Sunday dinners for all her family. She also grew strawberries and sold them to the local grocers.

Dorothy was a member of St. Joseph’s Catholic Church and the Freeburg Homemakers Club.

She was preceded in death by her husband, Albert E. Slack Sr.; an infant son; her parents, Walter and Mary, nee Grass, Christenson; a brother, Richard Christenson; and a brother-in-law, Ray Hendricks.

In lieu of flowers, the family requests memorials be made to the New Athens Home for the Aged. Condolences may be expressed to the family online at www.rennerfh.com.