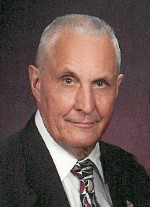 Mr. Peters was a U.S. Army veteran and served most of that time stationed in Germany.  He worked for American General Finance Company and retired after 35 years of service. After retirement, he worked an additional 18 years as a school bus driver for Mascoutah School District 19.  He was an active member of St. Matthew United Methodist Church, Belleville, IL. Doug was a very active member of the Swansea / Belleville Lions Club, former president and former eye glass chairman.  In his spare time, Doug enjoyed reading, sketching, painting and spending time with his family.

He was preceded in death by his loving wife of 55 years, Marlene I., nee Wuebbels, Peters, whom he married on July 11, 1964, and who died on April 1, 2020; his parents, Hubert and Neva, nee Barden, Peters; a sister, Virginia Anderson; sisters-in-law, Sharon Peters, Pat Wuebbels and Olive Wuebbels; and five brothers-in-law, Joseph Wuebbels, Robert Wuebbels, Jim Anderson, Marion Freed and Ronald Priest.

Memorials may be made to St. Matthew United Methodist Church.  Condolences may be expressed to the family online at www.rennerfh.com.