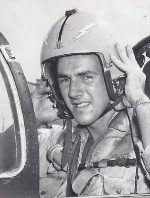 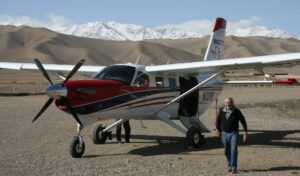 Terry was born and raised in Quincy, IL.  He attended St. Johns the Baptist grade school, Notre Dame High School and two years at Quincy College.  He never got tired of going home for lunch at Maid Rite.  In 1958, he entered the Naval Aviation Cadet Program, where he finished at the top of his class (a distinction known as Top Gun).  Terry flew fighter jets for the United States Marine Corps for six years, while stationed in the Philippines and Japan.

After completing his military service, Terry finished his undergraduate studies at the University of California, Berkeley, then medical school at the University of California, San Francisco.  He completed his residency in Ophthalmology in 1974 at Moffitt Hospital in San Francisco.  In 1975 he opened his medical practice in the arcades building on west Main Street in Belleville. Dr. Klingele, along with his partners, went on to build one of the largest ophthalmology practices in the country.  In addition to his practice, he traveled the world to perform eye surgeries in remote places where healthcare was limited and to train local doctors.  Terry particularly enjoyed his numerous trips volunteering in Afghanistan with the International Assistance Mission.

Terry was a brilliant, active, and intensely curious man. He flew MIG-15, MIG-17 and F-86 aircraft in air shows for years throughout the Midwest.  He won the Wright Brothers Master Pilot award after 50 years of safe aviation (despite being cited for flying through the St. Louis Arch during an airshow). At age 70, Terry took up hiking and climbed Mt. Kilimanjaro.  After retiring from his practice, he traveled to Liverpool, England and obtained a master’s degree in tropical disease with the goal of conducting research to end pediatric malaria.  Terry was a devoted husband, father, grandfather, brother, and friend.  He was an insightful conversationalist who could cover topics from bee genetics to nuclear fission.  An avid fisherman and hunter, he particularly enjoyed going after squirrels and turkeys.  Over the years he owned a variety of motorcycles, cars, boats and aircraft—he liked to go fast.  Cutting down a hardwood tree was a capital offense in Terry’s mind.

Terry was preceded in death by his parents, Marcellus and Dorothy Glisan Klingele; and his wife, Enid Klingele (Minor).  He is survived by his siblings, Bruce Klingele, Lynn Klingele, Becky Barbieri, and Joyce Moon; children, Erin, Elizabeth, and T.J.; as well as seven grandchildren, Victoria, Mark, Thomas, Lucas, Roman, Adrian and Quentin; and his close friend, Bill Shaltenbrand.

Terry was a generous and caring man who made significant financial contributions to the community; those who called him family or friend will miss him dearly.

Memorials may be made to the International Assistance Mission at https://iam-afghanistan.org/ Condolences may be expressed to the family online at www.rennerfh.com.