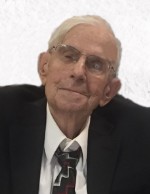 Curtis was retired from American General Finance Company.  He was a member of Crossroads Christian Church in Caseyville, IL.

He was preceded in death by his ex-wife, Mary Evelyn in 1985; his second wife, Madeline, in May, 2005; and most recently, his wife, Margaret Reichling Sutton, whom he married in October, 2005, and who passed away April 17, 2016.  Curtis was also preceded in death by his daughter, Sharon; his father, James P. Sutton; his mother, Bertha, nee Thomason, Sutton; and brothers Elmo, Lambert, A.D., and Rowland B., in infancy.

Visitation:  Friends may visit with the family from 10 to 11 a.m. Wednesday, July 13, 2016, at
George Renner and Sons Funeral Home, Belleville, IL.