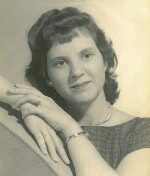 In her younger years, Mrs. Peck worked for W.T. Grants Department Store, East St. Louis, IL, and later at Miss Elaine Garments, O’Fallon, IL. She was a member of the Fairview Church of the Nazarene.

She was preceded in death by her husband, Robert L. Peck, whom she married on December 23, 1949, and who died on October 28, 2003; her parents, Christopher and Ina, nee Farr, Stratton; four brothers; two sisters; and a son-in-law, William Black.

In lieu of flowers, memorials may be made to the Alzheimer’s Association or Heartland Hospice. Condolences may be expressed to the family online at www.rennerfh.com.

Burial will be at St. John Cemetery, Collinsville, IL