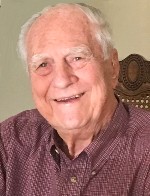 Mr. Bauer retired from Carpenter’s Local 433. He was a member of Our Lady Queen of Peace Catholic Church, Belleville, IL. He loved spending time with family, especially his grandchildren. Edward was a World War II United States Navy veteran.

Memorials may be made to Queen of Peace Catholic Grade School, Belleville, IL. Condolences may be expressed to the family online at www.rennerfh.com.