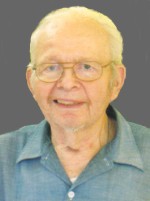 Mr. Bender retired from Stag Brewery in Belleville, IL, as an accountant.  He was a member of the Brewery Workers & Teamsters Local and the Stag Alumni Club.  Ed had also been a member of the Southside Improvement Association, Turkey Hill Grange, and the St. Clair County Anglers Club.  He was a veteran of the U.S. Army Reserves.

Memorials may be made to the Belleville Area Humane Society.   Condolences may be expressed online at www.rennerfh.com.

Funeral:  Funeral services will be held at 1 p.m. Tuesday, February 10, 2015, at the funeral home with Rev. Doug Stewart officiating.  Burial will follow at Valhalla Gardens of Memory, Belleville, IL.

To Ed’s Family,
You are in our thoughts and prayers during this difficult time.
With Sympathy,
Bill Kluge and Family