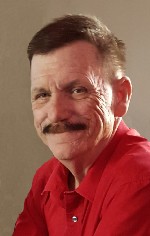 Mr. Fournie was a driver for Beelman Trucking Company and previously worked as a respiratory therapist.  He was a graduate of BTHS West, Class of 1973, and served as a medic in the United States Air Force.  Ed loved shooting and was a member of the National Rifle Association.  He enjoyed racing and spending time at the drag strip. He especially treasured time spent caring for children.

He was preceded in death by his parents, Edward J. Sr. and Carrie Marie Fournie; a brother, Dickie Fournie; and a sister, Frances Jeanette Long;

Memorials may be made to the American Cancer Society or to the Belleville Area Humane Society. Condolences may be expressed to the family online at www.rennerfh.com.

Visitation:  A joint visitation for Ed and his dear friend Kevin Schaffner will be held from 4 to 8 p.m. Tuesday, August 8, 2017, at George Renner & Sons Funeral Home, Freeburg, IL.