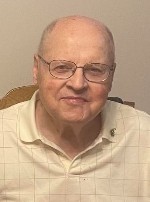 Ed graduated in 1959 from Cathedral High School and played the drums in a band with his high school friends. He served in the United States Army during the Cuban Missile Crisis. After the service, Ed worked as a technician in the lab at Monsanto Company, Sauget, IL, and retired after 35 years.  Following retirement, he continued to work part time at Scott Air Force Base. Ed loved spending time with his grandkids, woodworking, and golf.

He was preceded in death by his parents, Earl and Anne, nee Orlet, Heumann; two brothers, Joe and John Heumann; a sister, Rita (Robert) Sarikas; a sister-in-law, Barbara Gantner; a brother-in-law, Robert Atkinson; and his beloved canine, Lady.

Memorials may be made to the Parkinson’s Foundation, or the American Heart Association, or to the Belleville Area Humane Society. Condolences may be expressed to the family online at www.rennerfh.com.

Funeral: A Mass of Christian Burial will be held at 3 p.m. Wednesday, December 22, 2021, at St. Augustine of Canterbury Catholic Church, Belleville, IL, with Msgr. William McGhee officiating. Masks are required.