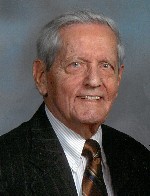 Mr. Wolf was preceded in death by his parents, Louis and Frieda, nee McClard, Wolf.

The family wishes to express their gratitude to Hospice of Southern Illinois for the compassionate care given to Ed during his final four weeks.

Memorials may be made to Trinity United Church of Christ or to Memorial Hospital. Expressions of sympathy may be mailed to 21 Tumbleweed Drive, Belleville, IL, 62221. Condolences may be expressed to the family online at www.rennerfh.com.

My family feels honored to have meant your father !
Our acquaintance was short but a memorable time of our conversations with Mr Wolf. Please accept our condolences for your loss !

We send our deepest sympathy. Eddie was a very special man. I enjoyed working for him at Scott AFB. He was a true leader; smart, kind,compassionate with a great sense of humor. We will miss him.