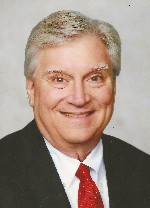 Ed grew up in Belleville, IL and graduated from Belleville Township High School West in 1973. He attended Washington & Lee University in Lexington, VA where he was a member of Sigma Alpha Epsilon fraternity and graduated with a business degree in 1977. Ed moved to Atlanta to begin his professional career at the Trust Company of Georgia as a commercial lender. Atlanta is also where he met his southern bride of 42 years, his beloved wife, Allyson. They married in 1979 and moved back to the Midwest shortly thereafter for Ed’s graduate studies. He received his MBA from Washington University in St. Louis in 1982 and he and Allyson settled in Belleville where they raised their three children.

After school, Ed joined his father in the family business, Callison Wholesale Liquor Company, now known as Breakthru Beverage. Ed moved to Chicago in 2003 and served as Executive Vice President for Breakthru Beverage where he oversaw several important mergers and acquisitions in the wine and spirits industry during his tenure. Ed enjoyed the work he did, but he particularly enjoyed his extensive relationships with the many colleagues, associates, and industry friends that he acquired over the course of his forty years in the beverage business. He especially loved getting to work with his son, Hamilton, who joined the business in 2011.

Ed was on the board of directors of Post Holdings, Inc., First Miami Trust and Savings Bank, First Securities Savings and Bank, and the Wirtz Corporation. He was also a member of Wine and Spirits Distributors of Illinois and a past board member of Wine and Spirits Wholesalers of America.  Ed was a member of St. Clair Country Club in Belleville, IL and Lake Toxaway Country Club in Lake Toxaway, NC.

Ed cherished his role as father and grandfather and was always most proud of his family. He was lovingly known as “Big” by his four grandchildren, whom he adored. Ed was the consummate gentleman and will be remembered fondly for his kind and curious spirit, his prolific mentorship, his good humor, and his great advice. He was generous with his time and resources and delighted in hosting friends and visitors passing through Chicago.

His family will always remember his often-cited motto, “Have a little fun every day” which he was able to do up until the end. In his honor, we will try our very best to do the same.

He was preceded in death by his parents, Edwin and Shirley Callison; and a sister, Lynn Callison.

Memorials may be made to Fellowship of Christian Athletes Metro East, 331 Salem Place, Suite 240 Fairview Heights, IL 62208, or to First United Presbyterian Church, 1303 Royal Heights Road, Belleville, IL 62223. Condolences may be expressed to the family online at www.rennerfh.com.