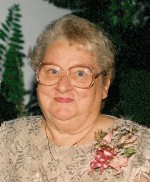 Mrs. Brandenburger was a devoted farm wife, mother and grandmother.  She loved gardening, bird watching, enjoyed working crossword puzzles, and was a bit of a gambler.  She was a member of the Broad Hollow Grange. She also belonged to the World Organization of China Painters and the Prairie Porcelain Painters.

Eileen was preceded in death by her beloved husband of 46 years, Melvin W. Brandenburger, whom she married on April 29, 1950, and who died on April 17, 1997; her parents, Elmer and Lulu, nee Mueller, Seibert; three brothers, Elton Siebert, Roland Siebert, and Elmer Siebert Jr; and one daughter-in-law, Wendy Brandenburger.