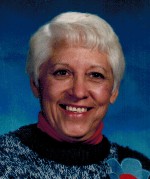 Print Obituary
Elaine “Mimi” Matthews, born on June 17, 1925, departed her earthly life on October 27, 2015.  Elaine was named Eloina Louisa Garcia (pronounced Gar-sha in Northern Spain) at birth by her Spanish, immigrant parents and later renamed “Mimi” by her granddaughter. Her parents, Jose and Josefa Garcia nee Quiros, were one of the several proud, Spanish families in the 40th & Waverly Sts. and Holy Angels Parish area in East St. Louis, IL.

Mimi attended St. Teresa’s Academy and Saint Louis University. She spent her life in education and was absolutely passionate about it. Mimi taught at several schools over the course of her career and touched the lives of so many students both as a full-time teacher and a substitute. Her teaching portfolio included Blessed Sacrament, St. Phillips, St. Catherine Laboure, Our Lady Queen of Peace and William Holliday schools. Mimi also had a great passion for antiques and was well known in the St. Louis antique market as a dealer and appraiser. She was the owner of Antiques by Elaine in Belleville for many years. Mimi was also a very active member of Soroptimist International and was a District Director of the organization. Mimi’s entire teaching career began with a phone call to find out why there was no scout troop for her daughter. After that phone call she became the scout leader and eventually the first director of scouts in Belleville. It was through scouts that the opportunity to become a teacher was presented to her.

On the evening of her senior prom Mimi met Robert “Bob” Matthews who later became her husband. Mimi and Bob married on August 4, 1945, at the Old Cathedral in St. Louis, Mo. Elaine was preceded in death by her parents; her husband; her sister, Lila Garcia; her former son-in-law, Robert Kern; and her beloved, lifelong friends, Gloria and Fred Miller. She is survived by her only daughter, Lee Kern, of Berkeley, Calif., three granddaughters Amy Kern-Huite of Belleville, Ill, Kathie Kern and Kristie Kern of Oakland, Calif., and one “grandson,” Rich Huite Jr. of Belleville, Ill. Mimi also leaves behind two “girls” who were “granddaughters” in her heart; Briana Goodwin of Corvallis, Oregon and Ciera (Goodwin) Flinders of Maeystown, IL.

Mimi truly came alive when she became a grandmother. She stopped everything she was doing when her first granddaughter, Amy, was born. Then less than three years later her life became fuller with the birth of “The Twins,” Kathie and Kristie.

Mimi was a constant in our lives; she was our calm, our rock, our security and as long as we had her then we had everything. She is in every memory that we hold in our hearts, and we are profoundly saddened at the loss she has left behind.

Mimi’s granddaughter, Amy, would like to extend her deepest gratitude to Dr. Brad Ringhofer, Julie and their staff for the phenomenal care they provided to Elaine for so many years, and for the amazing support they provided to Amy as she cared for her grandparents. It is also quite important to thank the entire staff at Mar-Ka Nursing home in Mascoutah, Ill., for treating Mimi like family and holding her with such affection until the very end. Our appreciation also must be given to Hospice of Southern Illinois for their help.

Memorials may be made in Mimi’s memory may be made to Gateway Pet Guardians.  Condolences may be expressed to the family online at www.rennerfh.com.

Visitation:  Friends may call from 9 to 10 a.m. Saturday, November 7, 2015, at Our Lady Queen of Peace Catholic Church, Belleville, IL.

Funeral:  A Memorial Mass will be held at 10 a.m. Saturday, November 7, 2015, at Our Lady Queen of Peace Catholic Church, Belleville, IL, with Fr. Matthew Elie officiating.

In keeping with her deep love for education, Mimi donated her body to Saint Louis University.

Amy,
My deepest condolences to you and your family on the loss of your Grandmother Mimi. My thoughts and prayers go out to you during this time of sorrow.

I am so sorry for the loss of your dear Mother and Grandmother.
Mrs. Matthews was my seventh and eighth grade English teacher at St. Phillips (1970-1972). I really enjoyed her class. She was a favorite teacher!
With deepest sympathy!
Susan

A wonderful sweetheart that I loved and would do anything for. If anything broke she’d say “call Steve he’ll know how to fix it”. I still have my antique stained glass that she gave to me many years ago. Did I mention generous? She will be missed! Now she and Bubba Bob are together again!

May God Bless you Mrs.Elaine Matthews. Although petite and feisty, you inspired me through your love of poetry and your discipline in your classroom.You opened a whole new world for me in your classroom teachings!

My deepest sympathy to Mrs. Matthews” family. Mrs. Matthews taught me at St. Catherine and has forever been in my memory and my heart. Loved her. I was lucky to run in to her over the years but it has been a long time. I would of given anything to know she was in Mascoutah and I could of visited her. A teacher that always made her students feel good about themselves. A new angel in heaven. May she rest in peace.