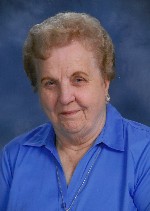 Mrs. Parker was a member of St. Augustine Catholic Church, Hecker, IL and the Ladies Sodality at the church. She was an active member of the Smithton Senior Citizens Club. She loved quilting, baking pies and especially enjoyed time spent with her children, grandchildren and great-grandchildren.

She was preceded in death by her husband of 58 years, Edward Joseph Parker, whom she married on May 12, 1954, and who died on December 27, 2012; her parents, Joseph A. and Rose B., nee Schmidt, Jansen; a son-in-law, Grant Aubuchon; three sisters, Dorothy Jansen, Florence Troesser, and Elvera Schaab; three brothers, Norbert, Kenneth, and Edwin Jansen; and brothers-in-law and sisters-in-law.

Memorials may be made to the American Cancer Society or to the charity of the donor’s choice. Condolences may be expressed to the family online at www.rennerfh.com.