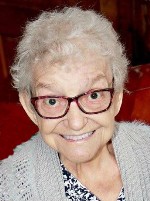 Betty was a medical records clerk, retired, at Anderson Hospital, Maryville, IL for ten years.  She formerly was a nurse’s aid in the ICU Department at St. Elizabeth’s Hospital, Belleville, IL, for many years.  Betty enjoyed traveling, reading, knitting, and crocheting, but most importantly, she enjoyed time spent with her family.

She was preceded in death by her husband of 45 years, Newman B. Jackson Sr., whom she married on August 12, 1949, and who died on February 10, 1995; a daughter, Gladys Jackson; her mother, Violet, nee Diffenderfer, Trambley; her father, George Eckman; a granddaughter, Tricia Arnold; five grandsons, Derek Jackson, Jason Hubbard, Brian Hubbard, David Jackson, and Ben Schneider; a brother, Harry Robert Eckman Sr.; and two daughters-in-law, Tami Jackson and Susan Jackson.

Memorials may be made to HSHS Hospice or to Cardinal Glennon Children’s Hospital, St. Louis, MO. Condolences may be expressed to the family online at www.rennerfh.com.

Sincerest condolences to the Jackson family regarding the passing of their beloved mother, grandmother, aunt and friend. Prayers are being said for all of you. RIP, Mrs. Jackson.

Your Mother was an incredible lady! She was a second mother to me for many years. I have hundreds of awesome memories. She holds a special place in my heart. Prayers and hugs.

So sorry to hear about your Mother/Grandmother. Only one so loved can be missed so strongly. We pray you all find comfort with each other and her memories.

Our deepest sympathy to all of your family for the loss of your Grandma. Prayers and blessings.