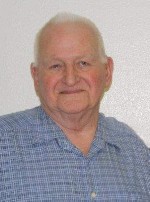 Mr. Bach retired after work as an ink maker at Marsh Stencil before his retirement. He was a U. S. Army veteran.