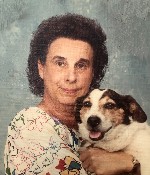 Elnor was a military wife who raised her family across the United States until they settled in Belleville, Illinois. She will be remembered for the love she had for her family and all animals.

She was preceded in death by her husband, James “Michael” Theiss; her parents, John and Anna Hacker; her brothers and sisters, Julius, Alvin, Leonard, Anita, and Dorothy; and her beloved dog, Fritzy.

In lieu of flowers, memorials are requested to BJC Hospice or to the Belleville Area Humane Society. Condolences may be expressed to the family online at www.rennerfh.com.

Per Elnor’s wishes, private cremation services were held and a celebration of life will be held at a later date.